GEO Magazine: We can do it in a different way!

LSE: Modalities of solidarity in Greece: a civil society at the cross-roads 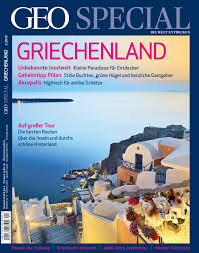 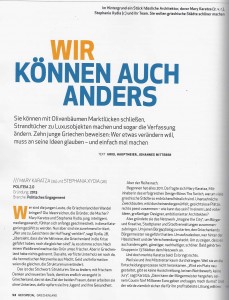 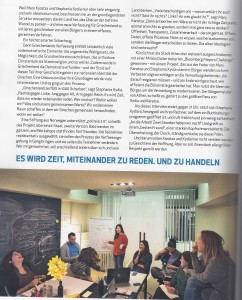 WE CAN DO IT IN A DIFFERENT WAY!

With olive trees they can close the market gaps, they can transform beach towels into luxury objects and even change the Constitution: Those who want to change something, must first believe in their ideas –and simply dare to make the change.

Who are the young people in Greece who want bring about change? The imaginative, the founders, the doers? Mary Karatza and Stephania Xydia, young, intelligent, media worthy, initially felt flattered to be considered and included in this category of people. However, they are increasingly becoming irritated. “Those who are seeking to portray the face of hope”, says Xydia, 28, “are overlooking that the circumstances, that brought Greece into this crisis, still exist and are the same”. Yes, that is correct: After a forest fire the trees become more fresh. But in Greece nothing burnt. The old, underdeveloped system still exists, the closed networks created of power, money and information are the same, the structures are unchanged.

The keyword: Processes. To change them, by incorporating fresh ideas and thinking methods, and with the newest tools.  To make this transformation finally happen in Greece. This is the goal both women are working towards continuously, sacrificing their youth and health.

Everything first began in 2011, where Mary Karatza, together with her co-workers, from the successful design-office The Switch, asked why so many cities around Greece are so “ugly”. Unattractive commercial buildings, faceless places, nothing fits together –how can this be? In a country, filled with ideas, extraordinary designers, and ambitious architects?

She then decided to found the network “Imagine the City” which brings together creative designers, urban planners and municipality together and opens a dialogue with citizens, which had never been initiated by government officials, to expose those who were responsible for the state Greek cities were in, and to show that there are alternatives. Alternatives to make things different, cheaper, sustainable and more beautiful.

Yet, Karatza soon realized that it did not really matter, because she and her colleagues could hardly permeate into the decision-making processes. “There is no bid, no competition, no jury” says Karatza, “which gives the mayor the opportunity to go to his cousin, give him 5 million euros and then say, here you do it”. This would also be the most profitable solution for him.

As a result Mary Karatza and Stephania Xydia, two ambitious and idealistic women, decided to target the basic structure, the decided to dig deep and change the very roots of the nation’s structure – to create a new Constitution for Greece, written by all Greek citizens, in a transparent and equitable manner.

Indeed the Greek Constitution contains many undemocratic elements: the unjust electoral law, restricted fundamental political rights, the Christian orthodox religion which serves as the religion of the state and so on. Moreover, democracy was first established in Greece –the historical pride thus belongs to the Greek national identity. A discussion over fundamental changes that are necessary would thus be of high interest to many Greek citizens. Consequently, it thus came into process.

“Greece is being fragmented in 1000 little pieces”, says Stephania Xydia, “Right against Left, young against old, poor against rich”. It is time that we all sit down and talk to one another. Who are we? In which direction do we wish to move forward? What are our common values? We want to create a space where Greeks together can discuss and discover how they wish to live and how they envision their future and their children’s future”.

A Norwegian foundation supports “Politeia 2.0”, the name of the project, translated as: second generation Polity. Soon, many workshops will take place all over Greece, five hours, one hundred participants, selected representatives; who aim to bring the constitutional process under way, and seek to change the way participants think. Whoever participates, ultimately develop aspirations for his/her life and the future of Greece.  “Many accuse us- why have you not defined yourselves? Are you right? Left? What do you believe in?” says Mary Karatza. “We then respond: is it not the best moment in time not to believe in anything, but rather for once think with a new mindset? Openness, transparency, working together –that’s what it is about. Open data, open processes. Not to know what the outcome will be, but to allow citizens to decide. The old ideologies brought nothing!”

The city of Athens recently won the “Bloomberg Mayors Challenge” –with a project, in which Mary Karatza and Stephania Xydia contributed: Citizens suggesting improvements to administrative authorities, and monitoring how efficiently the bureaucracy was able to perform their tasks. It uses citizen ideas, to modernize management and in extension society. The mayor of Athens, we heard, is a fan of Xydia and Karatza.

As this interview ends around 21.00, Stephania sits back at her desk in front of a huge excel sheet and, despite her headache, says with joy and sarcasm: “Back to work! Still a couple of hours left!”

It may not be correct to portray Karatza and Xydia as faces of Hope, but they nevertheless deserve our greatest respect.

It is time to discuss with each other. And to act.